Global financial markets generally climbed higher in the month of May, but at a more subdued rate than earlier in the year. Continued progress on the vaccination front and the subsequent reopening of communities provided optimism for sustained economic recovery. However, concerns that inflation could surge to levels serving as a barrier to a fully rehabilitated economy resulted in more modest returns this month. U.S. stocks (Russell 3000 Index) eked out a small gain of 0.5 percent. Value stocks outpaced their growth counterparts across regions. Sectors such as energy and financials (which are more prevalent in the value indices) were among the leading sectors in the month, fueled by higher commodity prices and a steeper yield curve. As we have referenced in the past, developed markets abroad have larger concentrations in those cyclical market segments (such as financial and industrials) that tend to outperform when value rotates into favor. Developed non-U.S. equity, as marked by the MSCI EAFE Index, returned 3.3 percent in May. Vaccination efforts continue to improve in many nations and the recently announced European Union COVID-19 recovery fund further bolstered investor optimism. Additionally, a falling U.S. dollar benefitted foreign equity performance. Emerging markets posted modestly higher gains with the MSCI EM Index returning 2.3 percent. Potentially intrusive regulation pressured large Chinese technology stocks while many developing nations continue to struggle with elevated cases of COVID-19 and vaccine distribution.

Fixed income markets were somewhat muted during the month but clawed back a bit of what was lost earlier in the year when interest rates were moving higher. The Bloomberg Barclays U.S. Aggregate Bond Index returned 0.3 percent during May. Despite the worrisome inflation report, interest rates were little changed as the U.S. 10-year Treasury yield modestly declined from 1.65 percent to 1.58 percent. Investment grade credit spreads inched tighter although high yield spreads widened a bit, coming off the 10-year low that was touched on May 3. Despite wider high yield spreads, investor demand for yield remains pronounced and the high yield index ultimately finished 0.3 percent higher. Elevated inflation data and increasing commodity prices were tailwinds for real assets this month, pushing the S&P Real Asset Index 1.9 percent higher in May.

A Few Thoughts on Inflation 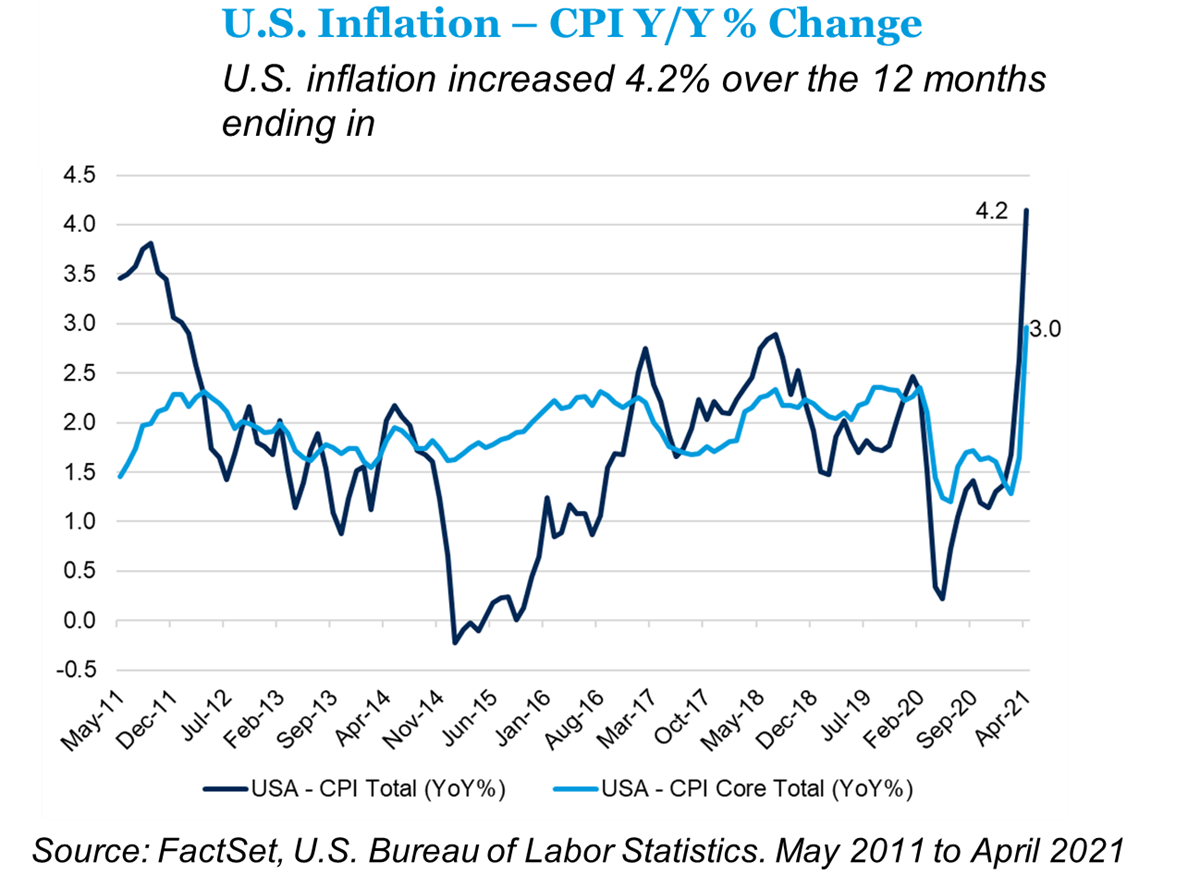 U.S. inflation has been a hot topic this year, and rightfully so, as historic fiscal stimulus programs, ultra-accommodative monetary policy and an economy moving ever closer to self-sustaining status nudged inflation expectations higher. The most conspicuous evidence on this front comes in the form of the U.S. Bureau of Labor Statistics’ April report depicting a 4.2 percent year-over-year increase in its Consumer Price Index (CPI); the largest increase since September 2008. The less volatile Core CPI measure, which excludes food and energy components, also rose a noteworthy 3 percent over the same period. While these figures certainly capture our attention and scrutiny, much of the increase over the last year can be attributed to a low base effect, as recent data solidifies from the unsustainably low levels witnessed in the spring of 2020 following the essentially complete shutdown of the economy in response to the COVID-19 pandemic. Notable components driving the April reading included energy (+25.1 percent year-over-year) and used automobiles (+21 percent year-over-year). Commodity prices plummeted in the immediate wake of the pandemic as consumers stayed home and businesses closed, but they have staged a steadfast recovery since then in anticipation of a global recovery. Supply chain disruptions (blocked canals, pipeline hacks, etc.) also impacted prices across industries but are beginning to show signs of being addressed and alleviated. Although Charles Schwab recently noted that shipping from Shanghai to Los Angeles has been taking more than double the typical 14-day journey, ports are now showing less backlog and the Baltic Dry Freight Index (which measures bulk material prices across popular global shipping routes) has moved off its peak earlier in the month. 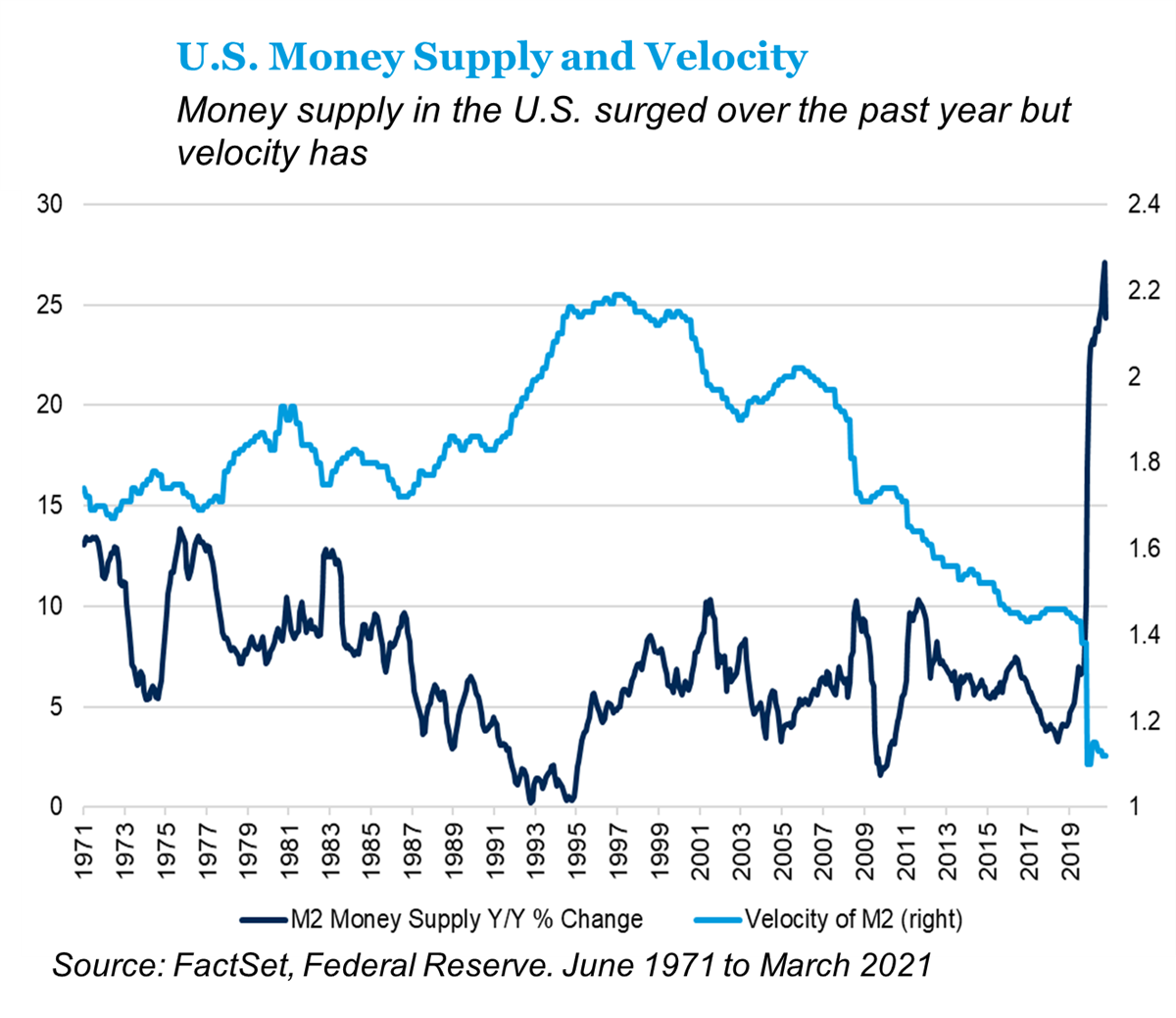 The Federal Reserve has largely viewed the recently heightened inflation data to be transitory and remained firmly committed to its existing cohort of policies and stances while letting inflation run above its long-term target of 2 percent in a bid to not prematurely extinguish the economic recovery. Slack in the labor market persists as unemployment rates remain elevated and the number of employed sits well below pre-pandemic levels – conditions which should hinder inflation from rising to troubling (and recovery extinguishing) levels near term. Unprecedented monetary and fiscal stimulus over the past year has injected liquidity into the system and is, indeed, a potential catalyst for higher inflation longer term. We also note that U.S. M2 money supply peaked at 27 percent in February from a year earlier, yet the velocity of money – the number of times one dollar is spent to buy goods and services per unit of time – is at its lowest level in 50 years and serves as one gauge that recovery still has a way to go. Short-term inflation will likely trend higher as we cycle off the 2020 lows and we expect may run at a higher rate compared to subdued pre-pandemic levels. We remain of the mindset that all things equal, inflation is unlikely to take hold at a level that would serve to derail the recovering global economy.  As we have stated throughout the year, an allocation to a diversified pool of real assets can be an appropriate and effective way to protect portfolios from the potentially damaging repercussions of inflation.

We continue to encounter ample evidence of a global economy making steady progress toward self-sustaining and better synchronized growth. As a result, we remain favorably inclined toward risk assets with the full recognition that recovery from the pandemic is unlike anything we, as investors, have previously encountered. The path to a full economic recovery will remain heavily influenced by ongoing disparate conditions across the globe, including: 1) efforts to vaccinate populations, 2) the terms, conditions and expectations pertaining to individual governments’ economic stimulus efforts, and 3) differentiated valuations across global capital markets. While periodic bouts of market volatility may test our collective patience near term, we persevere with the opinion that investors continue to be appropriately compensated to thoughtfully bear risk in manners otherwise consistent with their larger risk and return objectives.