Nine Moves to Consider Before Year-End

Year-end planning could prove more challenging for our FFP clients in 2021, given continued uncertainty over tax reform. The social safety net and climate bill known as the “Build Back Better Act” (BBBA) has been tied up in negotiations for months, given competing priorities on when to pass the infrastructure bill versus the spending bill. While the infrastructure bill ultimately passed and has since been signed into law by President Biden, the outlook for BBBA remains in question, albeit with some recent traction.

On Friday, November 19, the House passed the measure by a vote of 220-213 (along strict party lines). Attention now turns to the Senate, which will consider the bill over the coming weeks. Amid an evenly divided Senate (50-50) and with the expectation of no Republican support, centrists Joe Manchin (D-West Virginia) and Kyrsten Sinema (D-Arizona) will wield considerable power in upcoming negotiations. Passing BBBA using a process called ‘reconciliation’ will ultimately require unanimous Democratic support in the Senate (50 votes). Senate Majority Leader Charles Schumer (D-N.Y.) has cited a goal for the Senate to pass the bill prior to Christmas, though that timeline may be in question.

With the possibility that tax reform could be passed just prior to year-end, we encourage you to reach out to determine whether planning strategies (such as those outlined below) might yield meaningful tax savings.

To the delight of affluent individuals, the House’s recently passed version of BBBA did not pursue changes to the estate exemption or to existing grantor trust rules. The Senate could choose to address these items in its draft, though that seems unlikely given the even divide in the Senate and earlier pushback from Senator Sinema on tax increases for individual taxpayers.

While the elevated exemption might remain in place through 2025, high net worth individuals should not lose perspective of the unique planning opportunity to get additional assets out of one’s taxable estate. 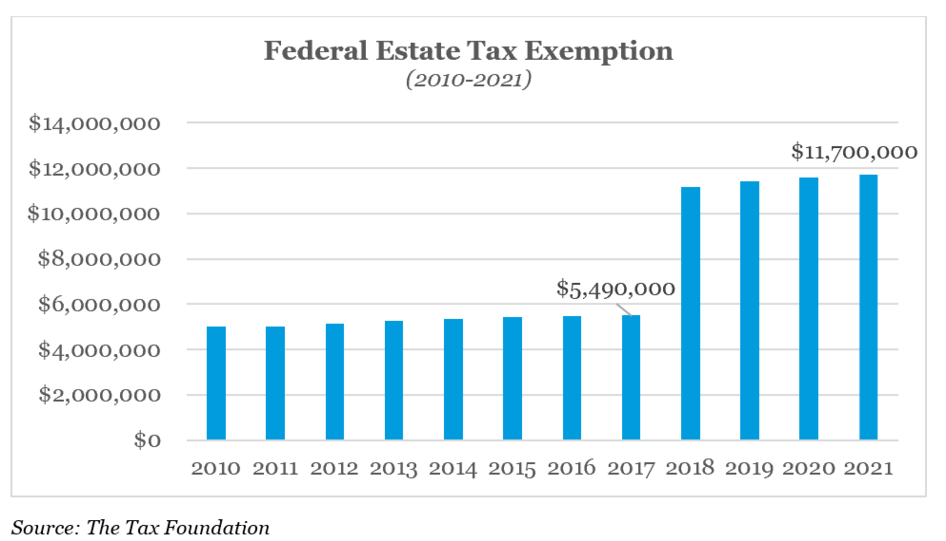 In our planning meetings, we will continue to work with high net worth individuals to evaluate current assets and assess how much might be needed for their remaining lifetime, with consideration to gift ‘excess assets’ to loved ones. Depending on the size of an outright gift, estate planning which incorporates making gifts to trusts may be advisable to provide parameters or safeguards for the intended beneficiaries.

As a reminder, the Treasury Department and IRS issued final regulations in November 2019 clarifying that taxpayers taking advantage of the increased exemption amounts would not be subject to a future clawback, should the exemption amount decrease from current levels.

Also, many provisions of the CARES Act (from 2020) were extended to 2021. Among the special provisions, individuals may deduct up to 100 percent of AGI for 2021 charitable gifts for cash donations made directly to a public charity (not to a donor-advised fund). This enhanced deduction (versus the typical 60 percent deduction for cash donations) may provide an additional planning opportunity.

Gifting Long-Term Appreciated Securities Rather than Cash
With equity markets near all-time highs, clients with taxable accounts may hold highly appreciated equity positions. From a tax planning standpoint, gifting long-term appreciated securities is a very efficient charitable-giving strategy as the charity receives the same economic benefit as a cash donation, while the taxpayer receives a tax deduction for the full market value of the gift and avoids paying capital gains taxes on the gifted security. 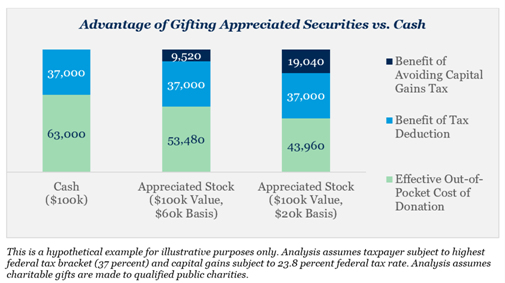 Clients who have a portfolio overweight to equities may use charitable gifting as a means to rebalance back to target weights. In doing so, a client can achieve philanthropic goals while avoiding having to sell appreciated equities to return to a desired target allocation. We can work with clients who want to pursue this option on how this may impact current portfolios.

Keep in mind that gifts of long-term appreciated securities to qualified public charities (including donor-advised funds) are limited to 30 percent of adjusted gross income (AGI) while similar gifts to a private foundation are limited to 20 percent of AGI. Charitable gifts in excess of the AGI limits result in a charitable carryforward which can be used over the next 5 years.

3. Satisfy Required Minimum Distributions using the IRA Charitable Rollover
The SECURE Act raised the beginning age for required minimum distributions (RMDs) to 72, from age 70½ previously. However, it did not adjust the age 70½ requirement for taxpayer eligibility to make a Qualified Charitable Distribution (QCD).

Under this provision, a taxpayer may gift up to $100,000 each year from an IRA to qualified 501(c)(3) charitable organizations (donor-advised funds, private foundations and supporting organizations are excluded). A qualified charitable distribution neither counts as an itemized deduction nor as taxable income, though it does count towards satisfying the RMD for that year.

This strategy may be beneficial for charitably inclined individuals who receive a greater tax benefit from the increased standard deduction rather than itemized deductions.

Beware of the “wash sale rule” which states that a loss cannot be realized for tax purposes if a substantially identical position was bought within 30 days before or after the sale. As a practical example, a client could sell an actively managed equity fund and could redeploy the sales proceeds to an equity index fund. In doing so, the client recognizes a tax loss while also keeping similar, but not identical, portfolio exposure to capture a subsequent market recovery.

Given notable market gains over the past several years, positions with notable unrealized losses may be limited, and particularly so if losses were harvested during the market tumult of early 2020 due to the COVID-19 pandemic.

It is important to review unrealized gains and losses across mutual fund holdings in taxable accounts and to compare those figures against capital gain distribution estimates to determine if selling a mutual fund position before the year-end distribution would produce a tax savings.

In addition, clients should be careful with late-year purchases of actively managed funds in taxable accounts. Investing in a fund just prior to its capital gain dividend record date could result in additional capital gains taxes. A client might instead wait to invest in the given fund until after the dividend record date or could invest in an index ETF for the time being and swap from the ETF to the actively managed fund at a later date.

6. Consider a Roth Conversion
With income tax rates at historically favorable levels, individuals who believe their future tax rate might be higher than their current tax rate might consider converting a portion – or all – of existing Traditional IRA assets to a Roth IRA. Assuming the Traditional IRAs have no basis, the amount of the conversion is treated as taxable income. In exchange, the Roth IRA grows tax-free with qualified distributions also treated as tax-free.

This strategy can be particularly beneficial for individuals with a taxable estate, as the tax cost of the conversion effectively reduces the size of the estate, while the named beneficiaries one day receive a very tax-favorable asset, compared to inheriting a Traditional IRA. In some cases, high net worth individuals might pair a Roth conversion with accelerated charitable giving, as the charitable deduction will help to offset the effective tax cost of the conversion.

Individuals with notable assets but with lower-than-usual income in 2021 might also consider this strategy, as it allows the taxpayer to essentially pay a reduced rate on the conversion while taxable income is low.

Note that there are several factors (time horizon, overall net worth, tax bracket, etc.) to evaluate to determine whether a Roth conversion might ultimately be beneficial. We are here to help you evaluate whether that may be in your best interests and to assist with paperwork.

7. Review Estate Plans & Retirement Account Beneficiaries
The Setting Every Community Up for Retirement Enhancement (SECURE) Act, enacted on January 1, 2020, effectively eliminated what was known as “the stretch IRA.” Under the SECURE Act, most non-spouse beneficiaries will be required to fully withdraw all inherited IRA assets by the end of the 10th year after the IRA holder died. Estate plans which previously incorporated this “stretch” strategy are now outdated and in need of updating.

8. Evaluate When to Collect Social Security Retirement Benefits
Individuals nearing eligibility for Social Security retirement benefits should give proper consideration for when to start benefits. A study1 estimated that only 4 percent of retirees start their Social Security benefits at the most optimal time, with retirees effectively forfeiting a collective $3.4 trillion in potential retirement income. A review of 2016’s new Social Security recipients showed nearly 60 percent of individuals collected benefits before their full retirement age (FRA), with only 10 percent waiting beyond full retirement age2. While general guidance is to wait (if possible) until age 70 to collect a higher benefit, there are several important factors to consider: anticipated life expectancy, income needs for the interim years when benefits would be delayed, availability of spousal benefits, etc. As a part of our planning process, we walk clients through when the optimal time is to take the benefits.

9. Consider a Change in State Residency
Changing your primary state of residency is not as simple as spending more than half the year in a new state. With many states more aggressively contesting such residency changes, individuals should take extra precaution to ensure that “facts and circumstances” support the case for changing one’s resident state. Some of the factors that support a new domicile include:

We know there is a lot going on from a financial planning perspective particularly in light of some of the pending legislation in Washington. Please do not hesitate to reach out to us with any questions.