As we share insights on the markets due to the Ukraine and Russia conflict, we do not want to minimize the humanitarian impact of what is happening.  Our thoughts are with everyone affected by this and we hope for a swift and peaceful resolution.

At this point, it is impossible to predict how the conflict between Russia and Ukraine will unfold.  However, we can look back at previous events to see impacts on the S&P 500 Index. In a review of 12 historical events, including the 2003 Iraq War, 1979 Iranian hostage crisis, and the 1962 Cuban missile crisis, the S&P was higher after those events (12 months later) nine of 12 times.

How the S&P 500 has historically performed around major geopolitical shocks: 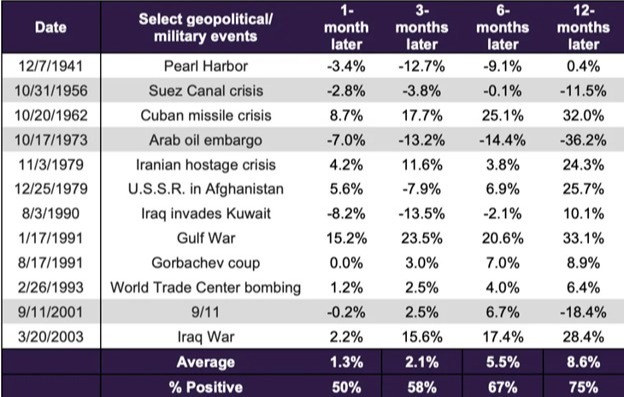 To be clear, this is not a prediction of future S&P prices other than to provide context that markets have seen events like this in the past and eventually recovered. We will likely see continued volatility and there certainly is the potential to see further downside.  This does provide perspective that drops like these are not atypical and should not impact a long-term financial plan.

Why is Russia invading Ukraine?
The official line states Russia is invading to protect Russian citizens, especially those in the self-proclaimed Russian republics of Donetsk and Luhansk who declared independence in 2014 when Russia last invaded Ukraine. However, Russian interests go much deeper. The collapse of the Soviet Union in 1991 left Russia vastly depleted from its former days of empire building. Security analysts believe this “one people, single whole” mentality is the true root.

Another reason Russia is invading Ukraine is to protect their energy interests, which are the lifeblood of the Russian economy. Russia supplies 40% of Europe’s heating fuel, in the form of natural gas. One of the two aging pipelines through which the gas is transmitted runs through Ukraine, which has lately shown a growing yearning for increased ties to the West.

What is happening in Ukraine?
Russia launched a series of coordinated attacks on key military targets across the Ukraine including air, ground and amphibious assaults. The situation remains fluid.

How have markets reacted?
As expected, risk assets have retreated on the unfortunate news. Equities broadly, even those with modest or very little connection to any goings in the region, have sold off in sympathy. Gold, treasuries, and other risk-off havens have gained in value. Commodity markets have also reacted with oil prices moving over $100 a barrel. European natural gas contracts moved up as much as 31% based on the news given Russia is a major supplier to Europe for the natural resource. As of close yesterday, Russian equites we’re down over 22% YTD. It is likely they will see continued pressure in the short-term as the US and EU allies weigh additional sanctions and actions. Globally currency markets are reacting as well. The Russian Ruble fell as much as 9% relative to the U.S. dollar and Ukraine suspended its currency operations under martial law.

How does this impact our portfolios?
Most acutely, Russia is 3.29% of the Emerging Markets Index. It is important to remember the Emerging Market Index is a collection of countries with different economic and geographical realities. While the Russian invasion is most likely to hurt the country itself and their immediate neighbors, other countries may benefit. For example, Brazil has benefited from higher oil prices globally and if tensions keep prices up, it may continue to do so in the future. Brazil is 4.32% of the index today and is up 20% YTD. Additionally, companies outside of Russia may experience more nuanced impacts. For example, French car manufacturer Renault has a subsidiary in Russia and fell nearly 10% on the news. On the global fixed income side, Russia accounts for 0.25% of the global bond benchmark and therefore is a modest contributor to overall risk of the index.

Does this impact the Fed?
Central banks globally, including the Fed are in a difficult position. With interest to keep prices under control while not smothering economic growth, they are walking a fine line. Markets largely expect a 25bps increase from the Fed after its March 15/16 meeting. However, conversation has been drifting to a 50bps increase given recent headline inflation numbers. The invasion has a dual effect of adding fuel to the fire of inflation with higher energy prices but may provide the Fed aircover to move at the more modest pace of 25bps based on greater uncertainty. A 25bps increase is presumed to be the preferred path for the Fed. Futures prices that indicate the market’s “best guess” on what the Fed will do also reflect this change in sentiment as shown below.

How does this change our outlook?
While this is a very unfortunate humanitarian event, our outlook moves beyond the immediate and seeks to allocate efficiently over the next 10 years. While a material headline event today, we believe the impact over the next 10 years is likely to be limited. Should our thoughts on this statement change, we will update you with the practical implications.

As always, if you have questions or would like to get to know us better, please don’t hesitate to contact us.  The Freedom Financial Partners team is always here for you, especially in times like these.