Returns were modestly lower across most fixed income asset classes for the month. Persistent inflationary pressures stemming from supply chain constraints and expectations for less accommodative monetary policy forced the U.S. 10-year Treasury yield to continue the ascent that began from its intra-year low of 1.19 percent on August 4, finishing the month at 1.55 percent[3]. Meanwhile, the yield of two-year Treasuries doubled since mid-September to 0.48[4] percent, reflecting a rising probability of an initial rate hike in 2022. U.S. investment-grade bonds (Bloomberg U.S. Aggregate Bond TR) were nearly unchanged as the spreads of the highest-rated segments of corporate credit fell to levels below their pre-crisis lows[5], offsetting the impact of higher Treasury yields. Five-year inflation expectations rose to their highest level since 2006[6], leading Treasury Inflation-Protected Securities (Bloomberg U.S. Treasury U.S. TIPS TR) to advance 1.1 percent.

A pivot away from emergency levels of fiscal and monetary stimulus began in recent months. In September, Federal Reserve Chairman Jerome Powell indicated the Federal Reserve is likely to begin tapering its asset purchase program in November and now nine of 18 FOMC members expect a 2022 rate hike. Meanwhile, the effects of the emergency fiscal stimulus, resulting in the largest expansion of America’s federal budget deficit since World War II, will start to fade. According to the Hutchins Center on Fiscal and Monetary Policy at the Brookings Institution, overall government spending added significantly to economic growth in 2020 through the first quarter of this year; however, the forecast is for fiscal spending to potentially turn into a significant drag on growth by the fourth quarter of 2021 and through 2023[7]. 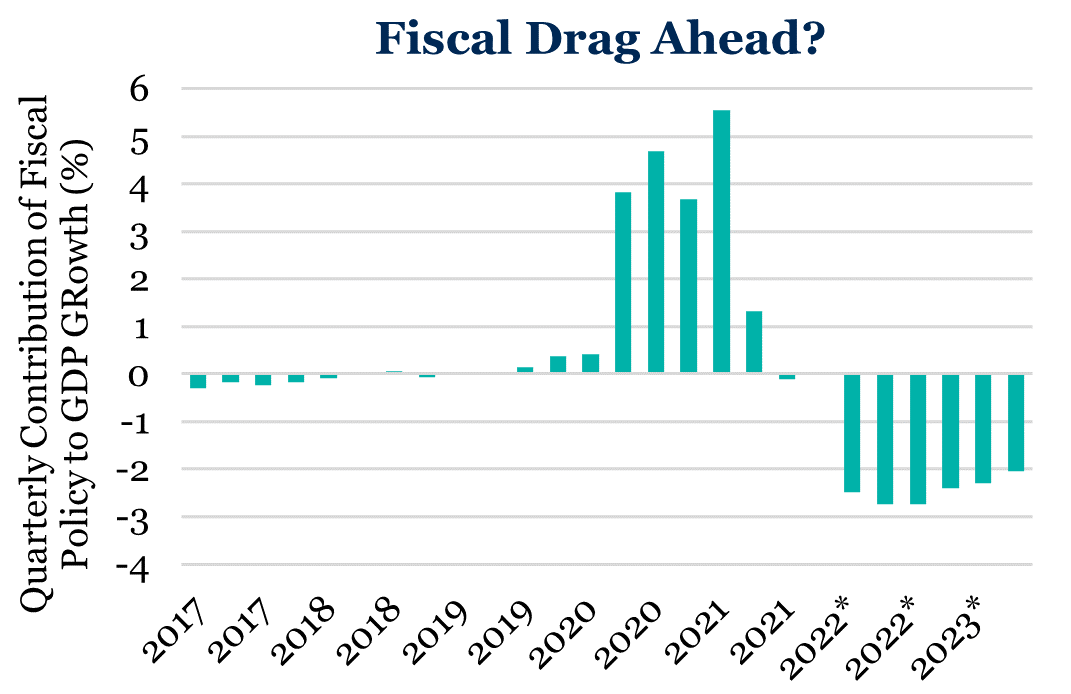 Policy makers outside the U.S. were more aggressive in their response to rising inflation. Central banks in South Korea, Australia, Brazil, Russia, Mexico and Norway[8] recently moved official rates up from historical lows. Meanwhile, the Bank of England indicated it could raise rates by year-end, and the European Central Bank will likely announce the retirement of its Pandemic Emergency Purchase Program next March.

Equity markets displayed resilience throughout the last cycle of monetary policy tightening. The Federal Reserve reduced its balance sheet from a peak of $4.5 trillion in October 2014 to $3.8 trillion in August 2019[9], while raising the Federal Funds Target Rate from a range of 0.00-0.25 percent in late 2015 to a range of 2.25-2.50 percent through early 2019[10]. Investors who remained invested through an initial spike in volatility in the early stages of policy normalization were rewarded with an average calendar year return for the S&P 500 of 12.5 percent from 2015 through 2019[11]. 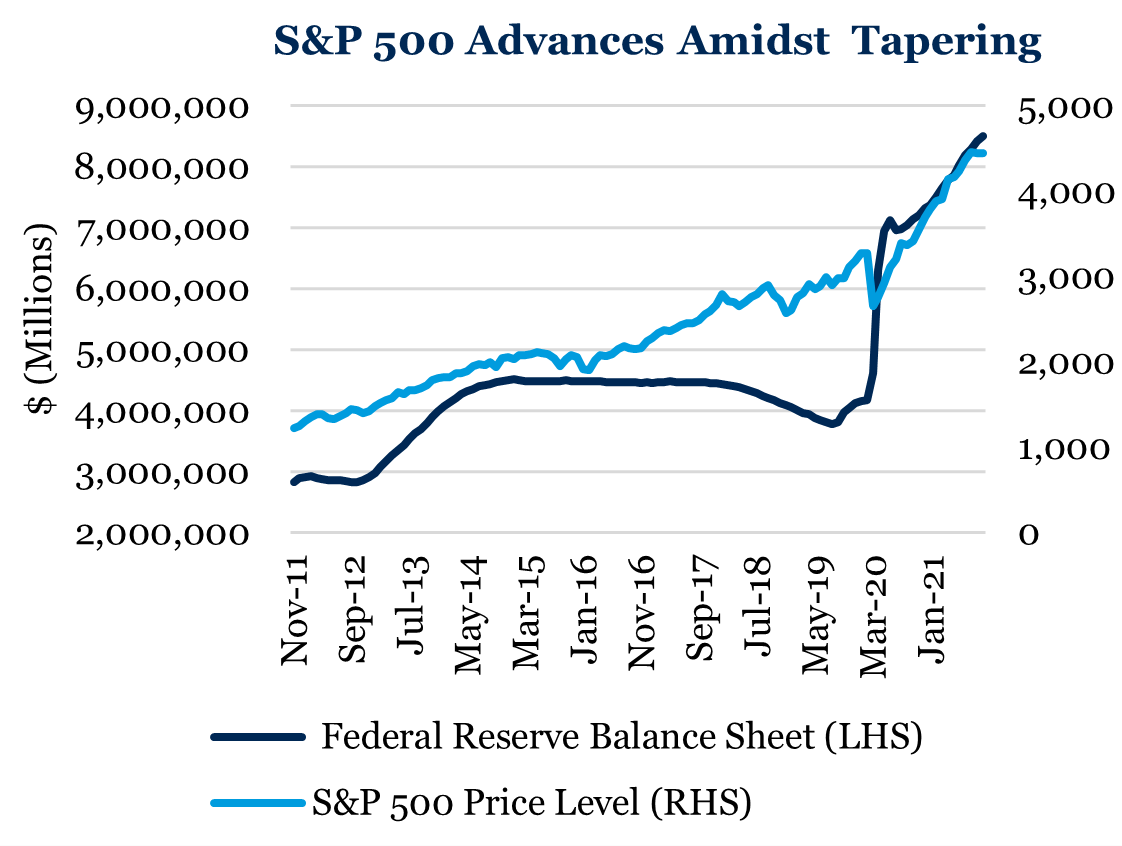 Market Outlook
Markets continue to weigh solid economic activity and corporate earnings against the potential impacts of inflationary pressures and a transition to less accommodative monetary and fiscal policy. Domestic equities ascended with historically low volatility to all-time highs after S&P 500 earnings expanded 94.2 percent year-over-year in the second quarter[1]. Yet, sentiment based on a somewhat evolving macro-economic outlook caused abrupt swings in leadership within broader indices. With the recovery of S&P 500 earnings to above pre-crisis levels and valuations at elevated absolute levels, we expect equity markets will likely trend more in-line with earnings growth in coming years. Persistent shifts in style leadership are possible as investors grapple with the transition to more normal levels of economic activity and monetary policy. To this end, we recommend investors maintain a portfolio anchored by reasonable long-term return expectations with diversification across assets that may benefit from a variety of macro-economic conditions.